Praslin is the second largest island of the Seychelles and only 40km north-east of the main island of Mahé. Although not as mountainous as its larger sister – the highest peak is 330m – Praslin also offers typically Seychellois granite formations, white sandy beaches and a protecting coral reef with crystal clear waters. Near the Catholic St. Josephs Church in Grand Anse, the independence monument rises majestically two metres towards the sky.

On the pedestal lies a nut of the famous Coco de Mer. In the past, European rulers would pay a lot of gold for one of these giant fruits. The legendary nut grows in the Vallée de Mai Nature Reserve, one of the smallest natural heritage sites in the world, as declared by UNESCO in 1983. A visit to this famous national park is an absolute must for Praslin visitors. The park is located in a valley in the heart of Praslin. Its palm forest is an impressive remnant of the prehistorical woods, which already existed when Praslin was still part of the former Gondwana continent.
Due to continental drifting, Gondwanaland split up into Africa, the Indian subcontinent and Madagascar, leaving the granitic islands of the Seychelles behind. During millions of years of isolation a unique, endemic flora and fauna developed. Unlike the rest of the island, the Vallée de Mai has been a pristine jungle until the 1930s, almost untouched by humans. Various myths exist about the Coco de Mer.
One reason for this is that it bears a striking similarity to the human sexual organs; the catkin like male flower is up to 1m long and the coconut fruit resembles the private parts of a woman.
The male plant can reach a height of 30m and the female of 23m. The coconut is the largest seed in the world and can weight up to 20kg.
With a bit of luck, visitors can observe various endemic bird species in the park, such as the Vasai Parrot, Blue Pigeon and the Bul Bul.

Praslin has more than 26 beaches and bays. One of the longest sandy beaches is Anse Volbert or Cote D’Or, located in the east of the island. Most of the island’s watersport activities can be found here.
Anse Bois de Rose and Anse Boudin in the north-east, as well as Anse Kerlan in the north-west of Praslin are dreamlike white sandy beaches with fantastic granite formations.
Anse Lazio in the north-east is considered one of the most beautiful beaches of the world; an impressive scenery of powder white sand, turquoise water, giant granitic boulders and evergreen palm trees.

Praslin is a very good starting point for day excursions to neighbouring islands. The smaller island of La Digue is often used as scenery in various commercials and photoshoots. The nature reserve Cousin is ideal for bird watching. Curieuse is a former leper colony and home of giant tortoises and the endemic Coco de Mer palm. 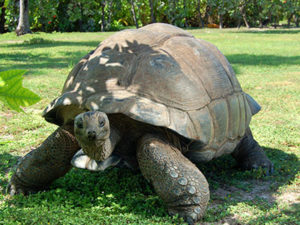 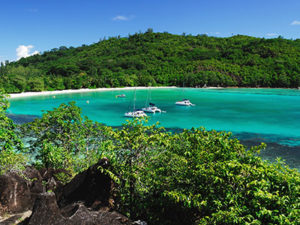 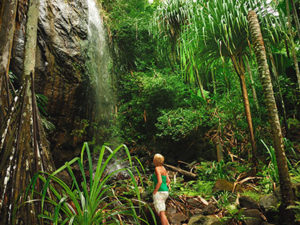 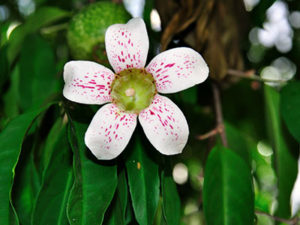 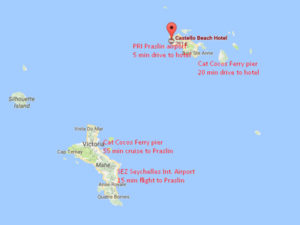 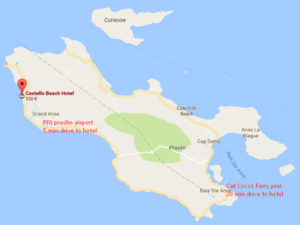