To explore the natural paradise by foot, guided walking tours will introduce the islands exotic flora and fauna and can be organised by the hotel, a local tour operator or by your own. There are clearly marked trails on Praslin, leading through tropical forests with enchanting views of the island. It is advisable to start walking during the cooler morning hours and to bring plenty of water, because it can get very hot throughout the day. During the rainy season, especially from December to February, mountain paths can be slippery. The best time for trekking on Praslin is between May and September.

Praslin is nerved by wonderful trekking paths. The most worthwhile is the Salazie Trek (3km, 2-3 hours). It rises from Grand Anse to a plateau. Part of the plateau is boggish but it is overgrown with beautiful endemic trees. Thereafter the path leads downhill through palm forests, mango and breadfruit groves and ends in the north of Praslin, at the Anse Volbert Village.

The island transit on the Pasquière Trek (2km, 2 hours) starts as well at the Grand Anse and goes the first part together with the Salazie Trek. But on the plateau at the parting of the ways you follow the main path left. Along Pasquière river the path leads through secondary forest to the settlement Pasquière at Anse Posession.

Fond Ferdinand (3km, 2 hours) is the second site with primarily palm forest but smaller than Valleé de Mai. A devastating fire destroyed ample parts in 1990. Vegetation starts to recover. Several Coco de Mer palms sprouted and a lot of interesting things are still there. In the south of Baie Ste. Anne the street continues directly along the beach, afterwards it rises softly and crosses a river. At this point the path to Fond Ferdinand goes off right. If you want to hike further, follow the path to the viewpoint. From here you can either walk back the same way or follow at the last fork the left path which leads down in the river valley and further to Anse Marie-Louise.

The most beautiful beach of Praslin, Anse Lazio, in the north west you can only reach on foot or by the smallest rental car, the minimoke. When you reached the bus station Anse Boudin it is a 1.5km walk. Anse Lazio consists of very soft white sand which reaches deep into the sea. At the cliffy sides of the bay is an outstanding snorkelling area with marvellous coral formation. Anse Lazio River forms big ponds and brackwater lagunas. 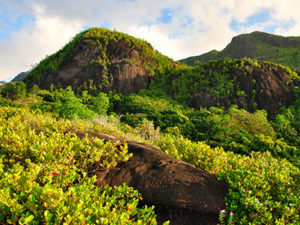 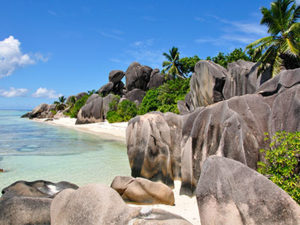